The Untold Story of Captain Scotland

Launched in 1987 this version of Captain Scotland wasn’t quite the first incarnation. He had first appeared as an Alan Davis style Captain Britain, complete with saltire mask, in a few pre versions of Atomic / Captain Scotland comics that were only distributed to friends.  Those back issues have been lost in the mists of time but here at Comicsflix Towers we’ve found a rare front cover featuring Captain Scotland’s original look – spot the similarity with the Alan Davis Captain Britain below. 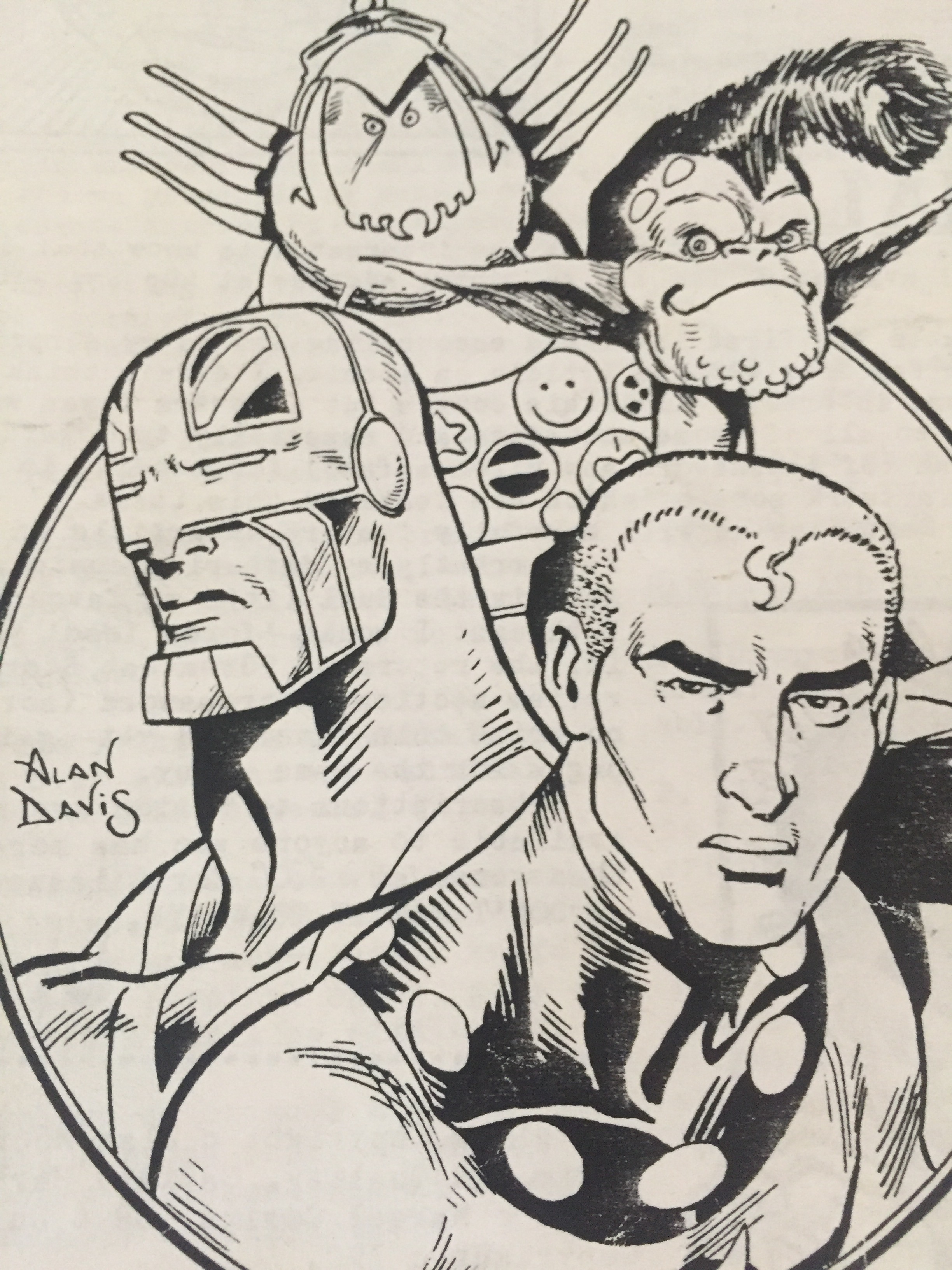 The character had also been inspired by a chat with the then largely unknown Grant Morrison and Tony O’Donnell, hosted by ‘Near Myths’ and ‘Diceman’ artist Graham Manley and organised by future First Minister Jack McConnell.  (Tony Foster seated middle, Jack McConnell behind, Graham Manley 6th left, Andy Macfarlane 1st right, Michael Duncan 3rd right in picture below. The cover of the comic they produced (art Graham Manley) is below.

Grant and Tony told the team about their character Captain Clyde, who had appeared in three local Scottish newspapers from 1979 – 92.

Rather than continue with a rip off Captain Britain the team felt they wanted to create a character that was ‘gritty’ and set in contemporary Scotland but had a little bit more hip humour that the Neil Adams / Denny O Neil influenced Clyde. A new version of Captain Scotland was beginning to form. 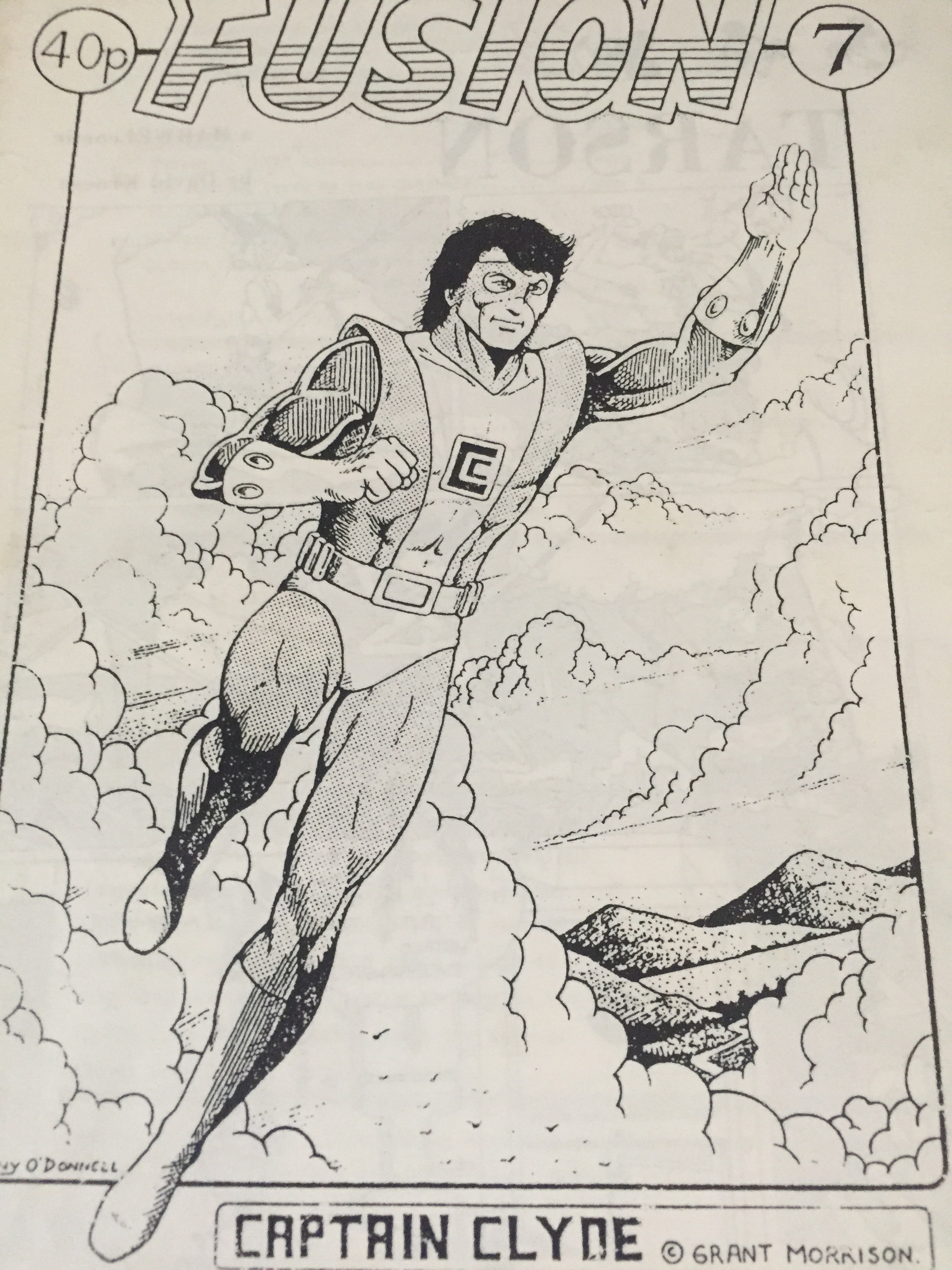 Set in Edinburgh, with opening scenes in the University science labs, the strip introduced Scott Stewart. He fancied Madeline Shepherd, was fancied by Cybill Hayes (the names taken from Maddy Hayes / Cybill Shepherd in popular Moonlighting TV series) and had serious girl issues with Shona MacDonald who was spreading rumours about him on campus.

Taking the mickey about boys talking about Sex all the time and introducing some ‘Knockabout Comics’ humour into the mix Captain Scotland’s alter ego Scott Stewart essentially invented viagra ten years before it was commercially available. And similar to viagra, which was actually a side effect from trying to create a blood pressure drug, the side effect of this drug was superpowers. Albeit temporary ones as the rabbit initially injected with the serum died soon afterwards! 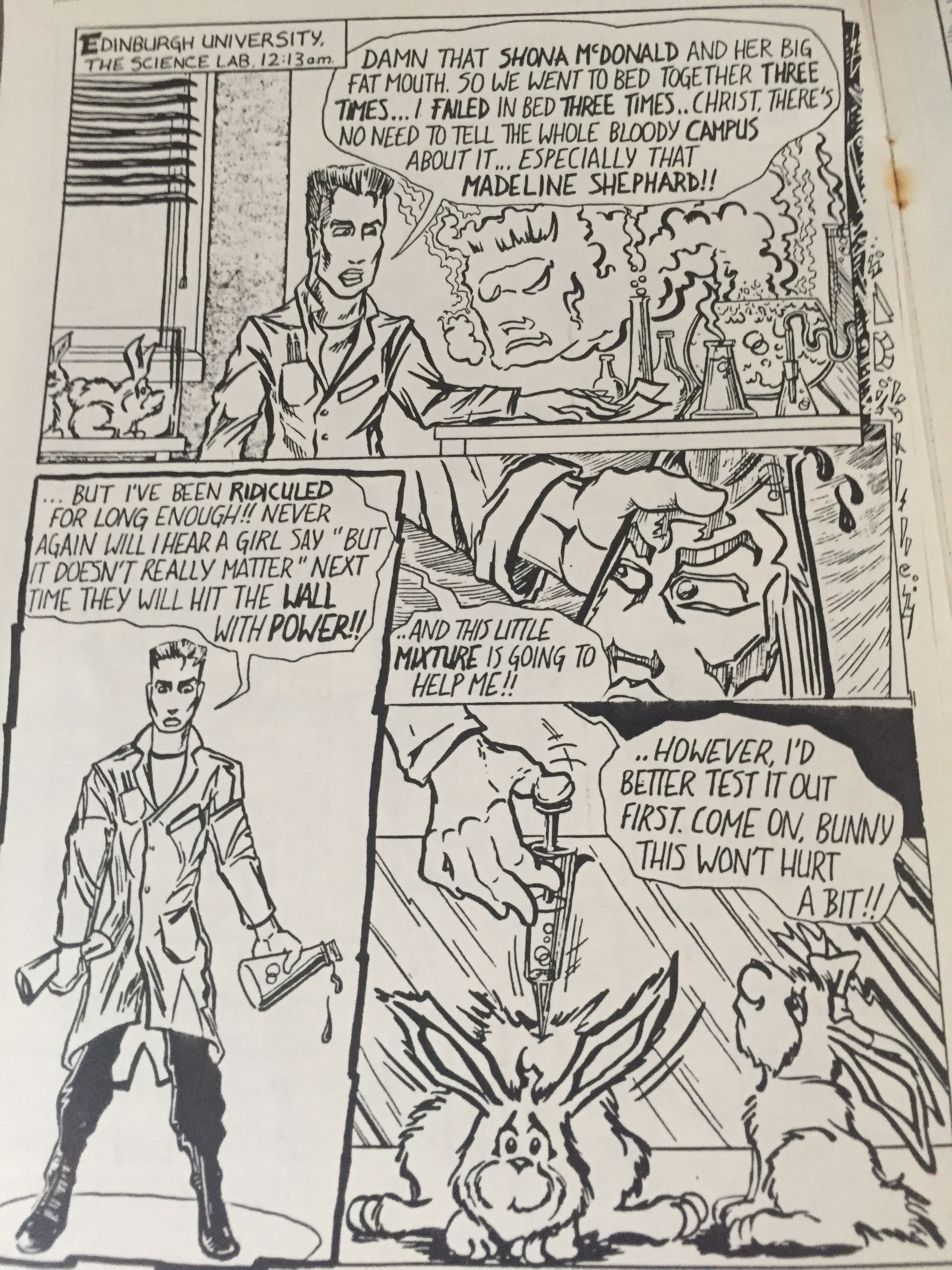 The team worried about unintentional sexism, depicting sexually excited rabbits and drug use but decided that in the late 80s that was the closest they were gong to get to being controversial punk rockers. Mixed with depicting strong women, gay friends and campaigning against animal testing they thought the creative ying yang karma was a good one.

The new Captain Scotland was only teased in issue one of Atomic. His first official appearance would be inside issue 2 as well as being featured on the front cover (out of costume).  The creative team wanted to make a splash on the inside – and they did!

The prologue of part two was meant to introduce the idea that the super powers were temporary (maybe deadly) and ongoing drug injection to change Scott Stewart into Captain Scotland would not be ideal going forward. The plot thread never reached conclusion.

Captain Scotland finally appeared in all his glory in issue 2 page 5. Tony Foster explains, “Craig Conlan pulled out all the stops with a picture that made you go wow! The mask from earlier versions had gone – he looks like Justin Bieber! He had purple spikey hair. Saltire costume. The cape would probably be Green, although with no colour it could be anything you want. I wanted him to look like a thistle – especially in silhouette, so the edge of the cape was to be as spikey as his hair. Craig had none of it though, but I still thought his artwork was absolutely brilliant and captured the character really well. Script wasn’t too bad either.”

This was a similar design to those worked up at the original comic workshops. 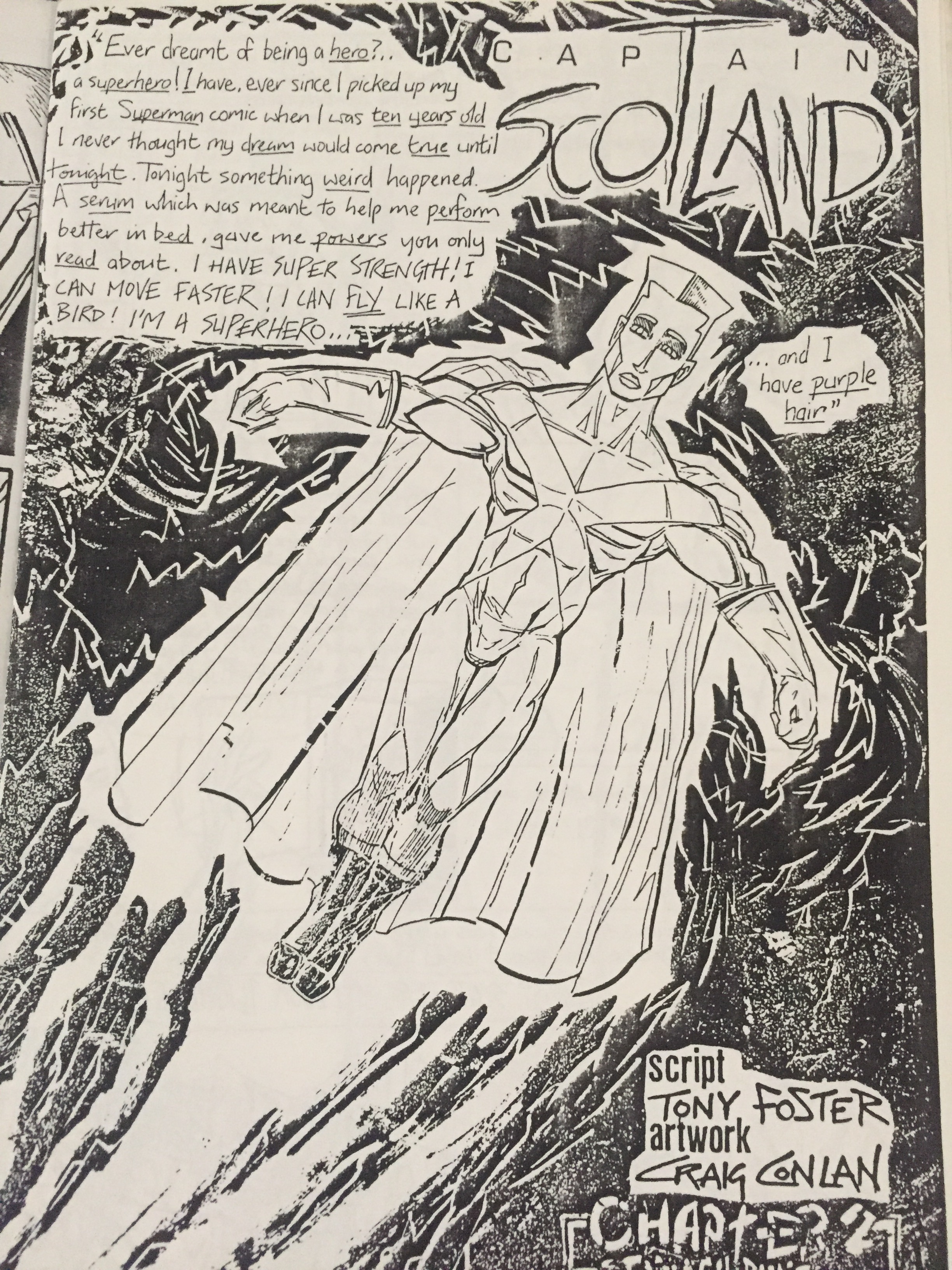 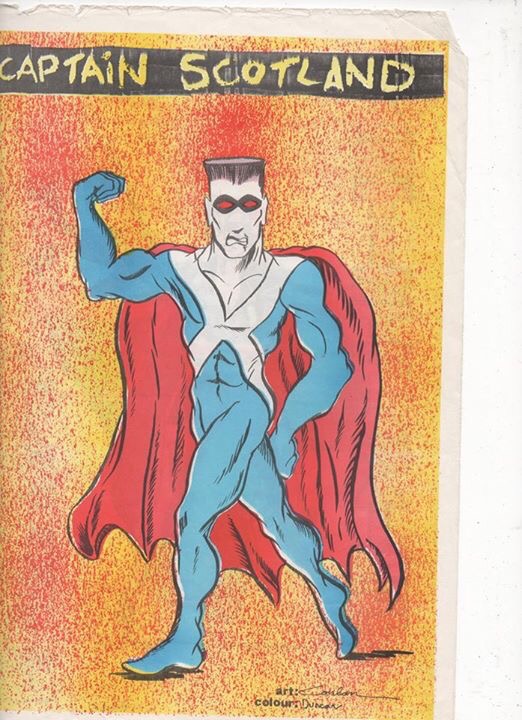 In the second instalment you met Scott’s good friends David Willis and Bruce Addison (you are probably starting to get the Moonlighting references now). Bruce was going to be a strong supporting gay character and Madeline Shepherd was going to be a strong female lead, campaigning against animal testing and giving Scott Stewart a good hiding in issue 3! 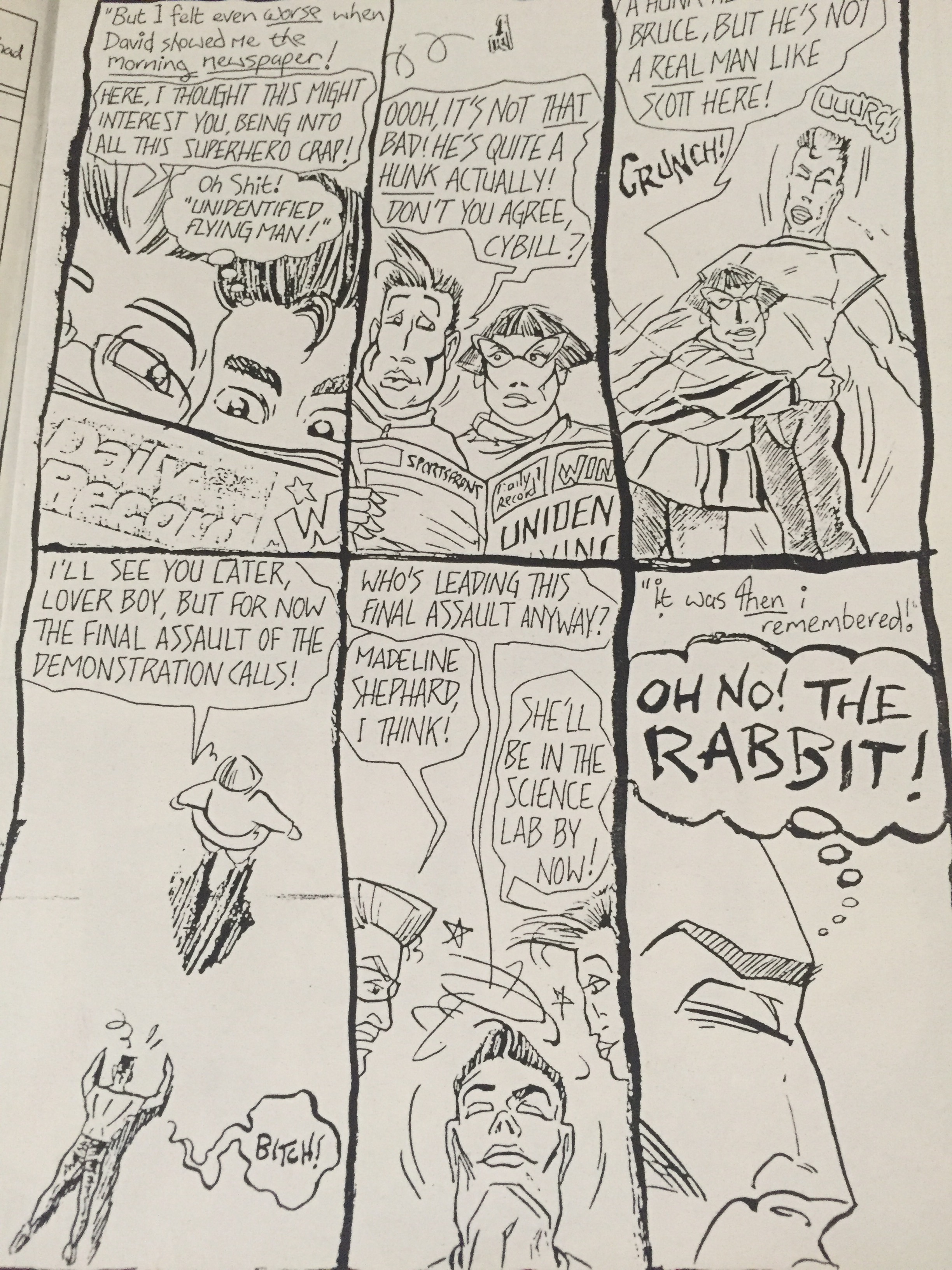 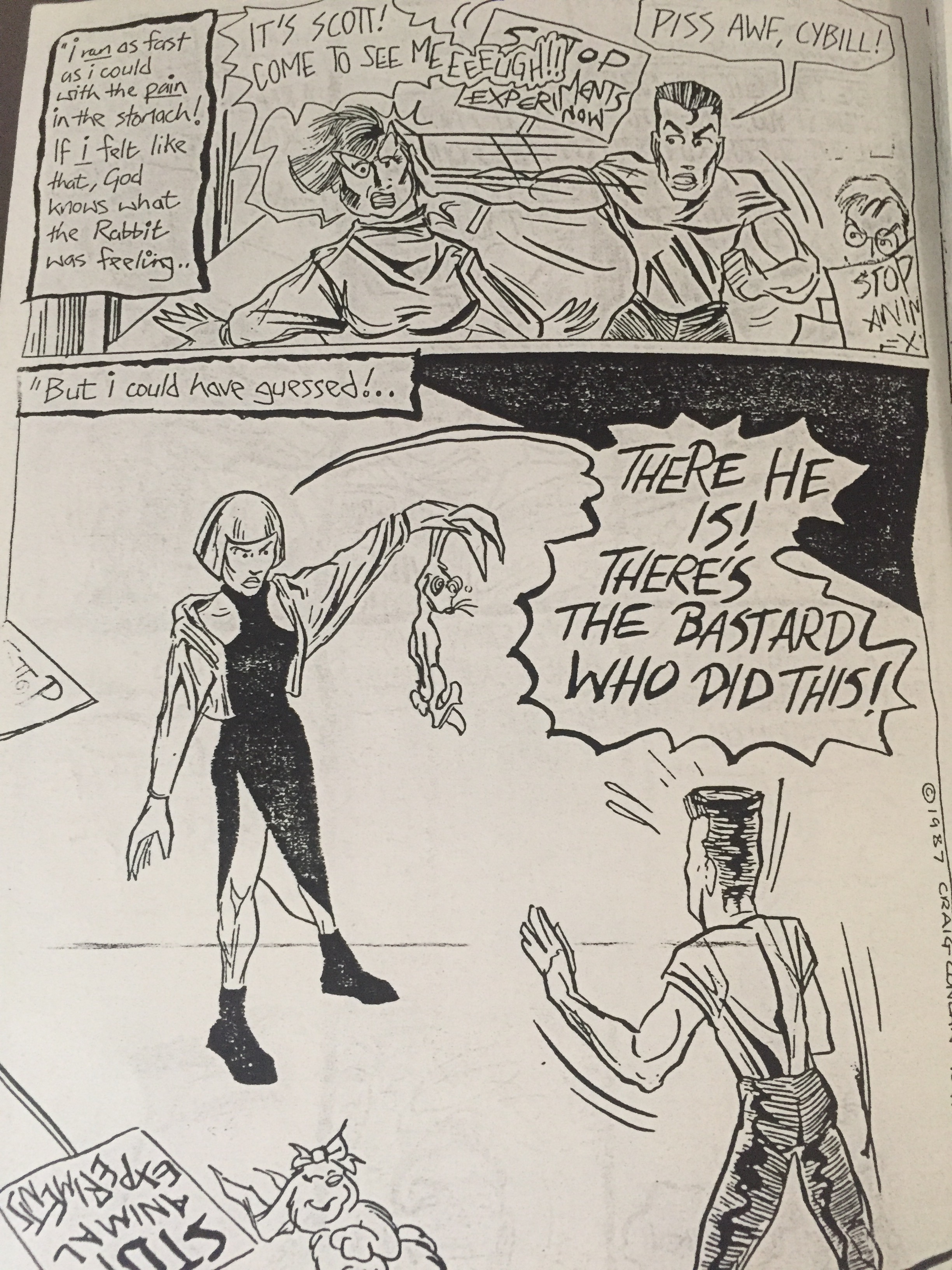 Scott had to face everyday issue on campus too. Spike Bunn the resident university hardcase and bully and a godfather style landlord who he was in debt to for rent – not exactly entertaining storylines for Craig who liked to do his own writing and wonderful expressive art.

Craig struggled to meet deadline for issue 3 (writing and drawing ‘Dogma’ instead) made issue 4 but really wanted some entertaining characters to draw. Tony promised to wash away the everyday life storyline and introduce a Ronin inspired Mikey Lee ninja character with a rather humour filled origin story. 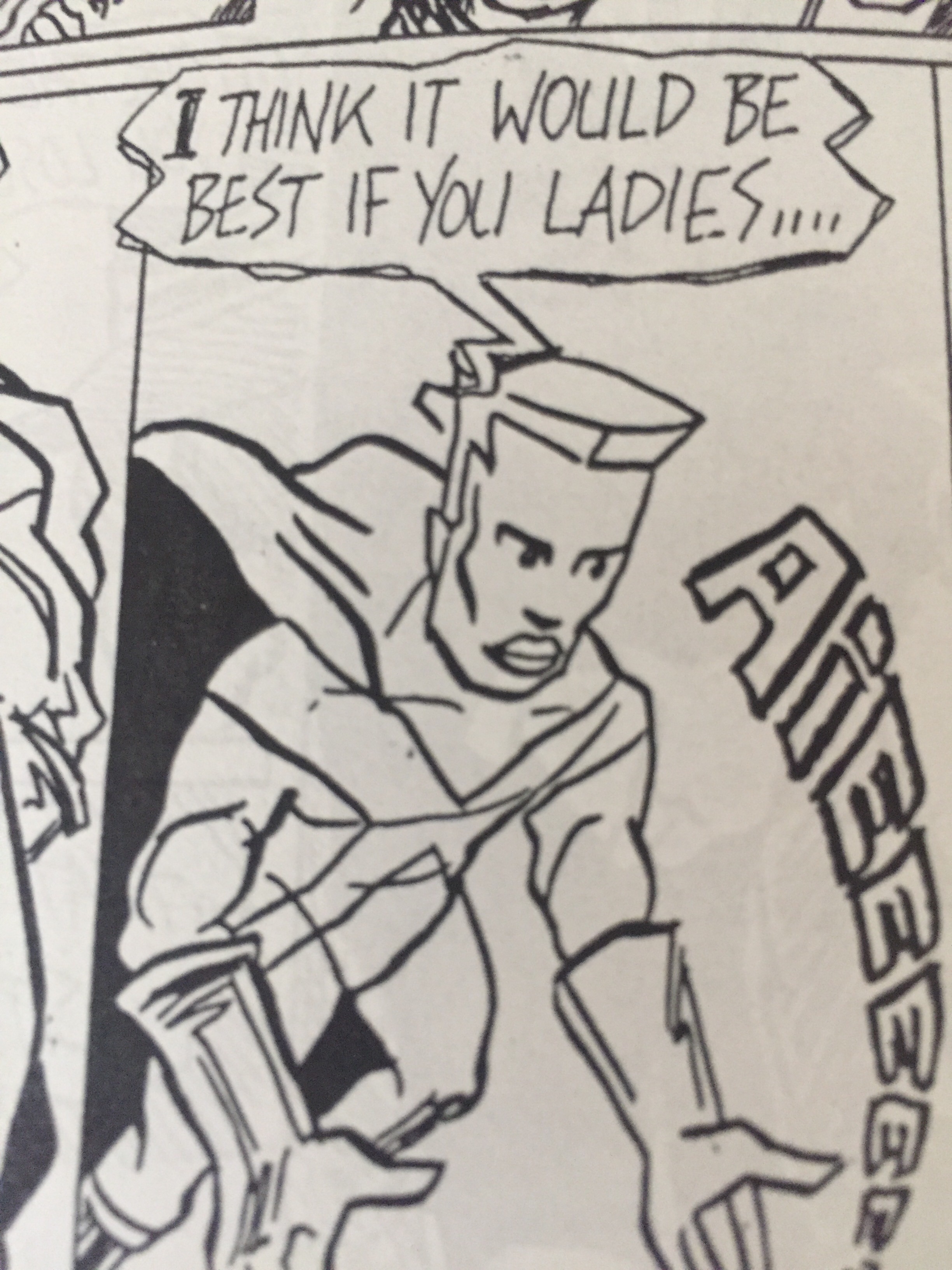 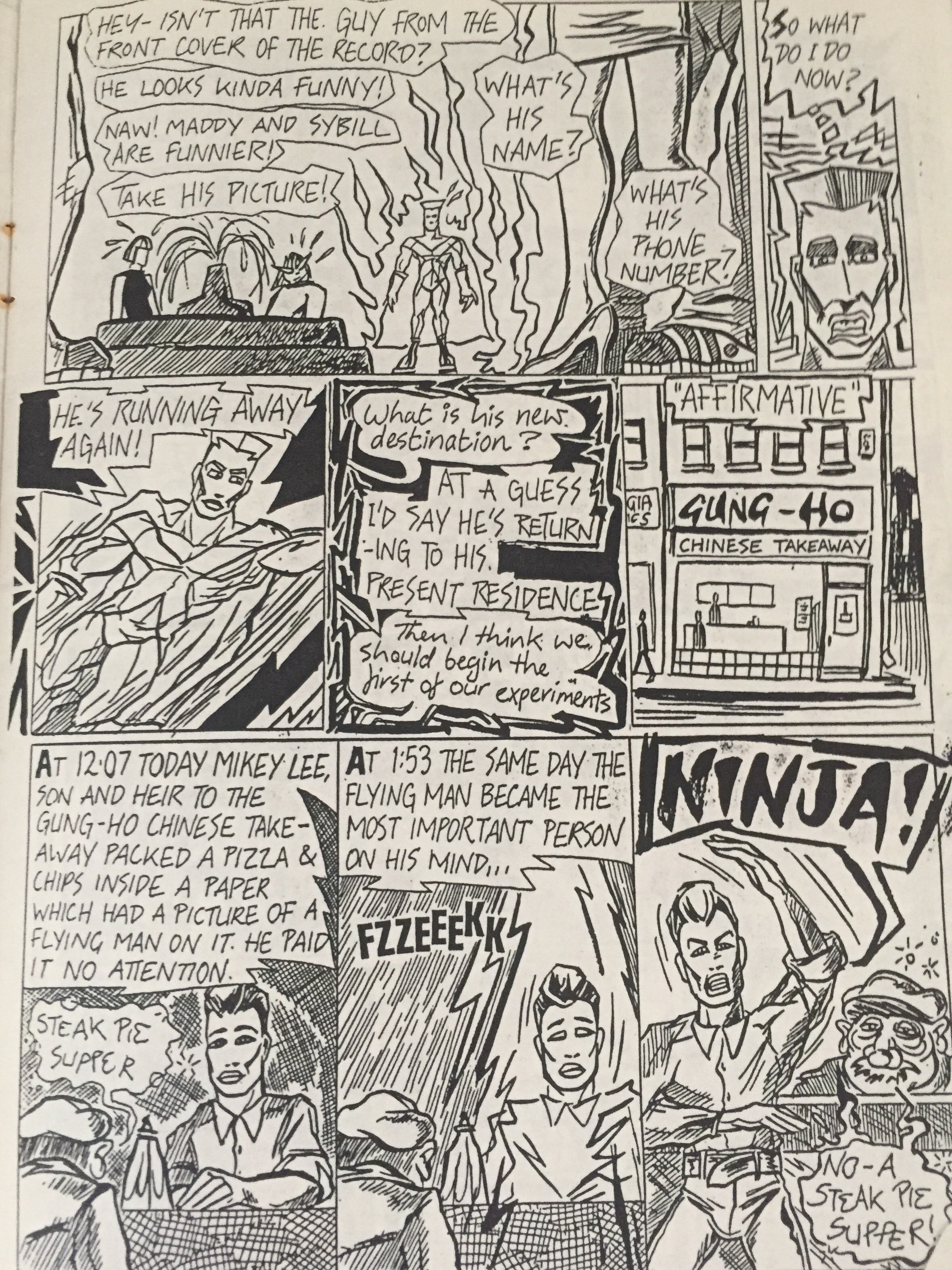 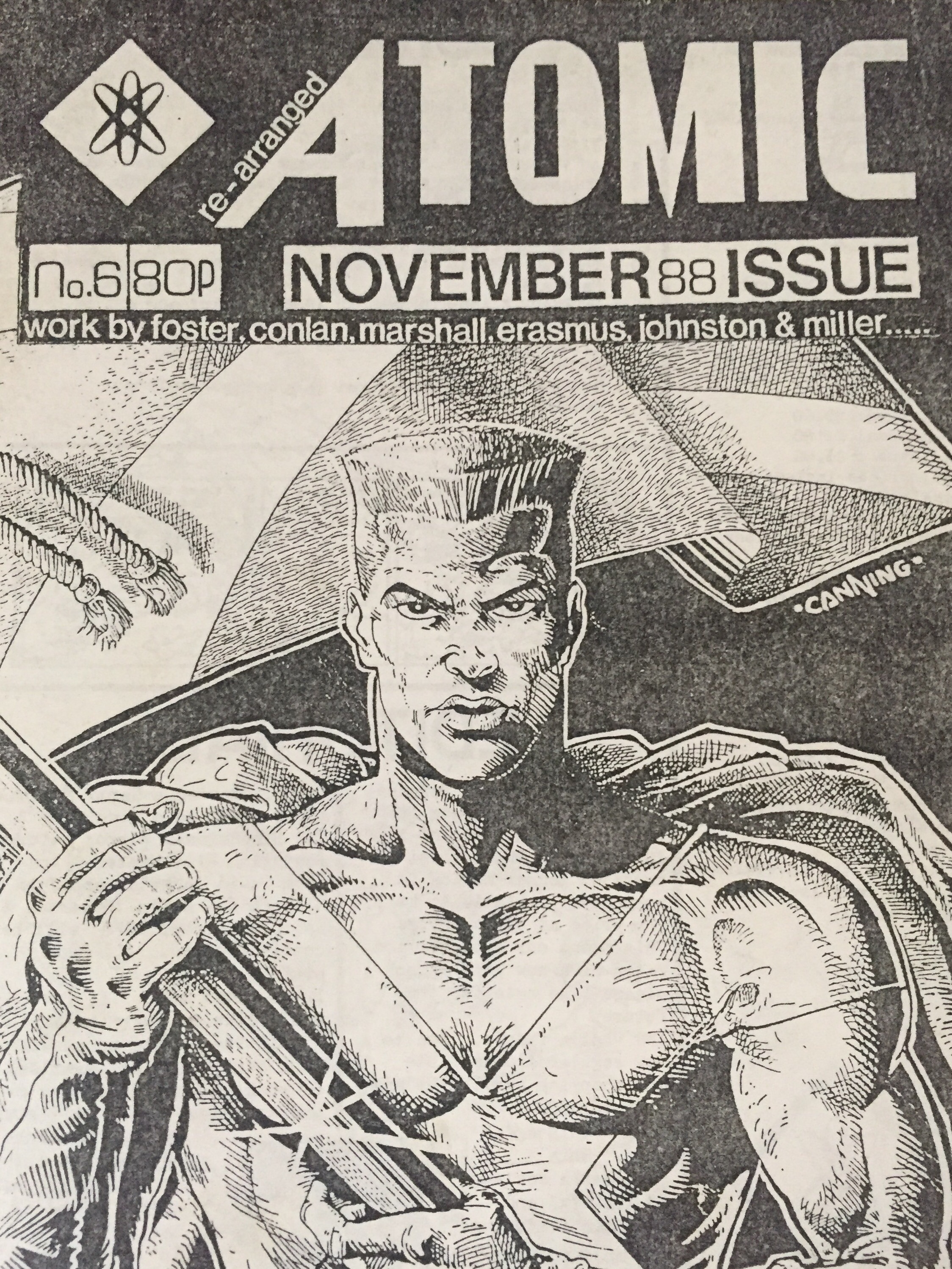 Sister Peroxide was introduced in issue 6. A single mum and ‘scarlet woman’ this was a Craig Conlan inspired character, showing another side of Edinburgh that wasn’t all castles and Royal Miles. She was knocked out by Mikey Lee before he also met his hilarious ‘Indiana Jones’ inspired demise – never to be seen again. 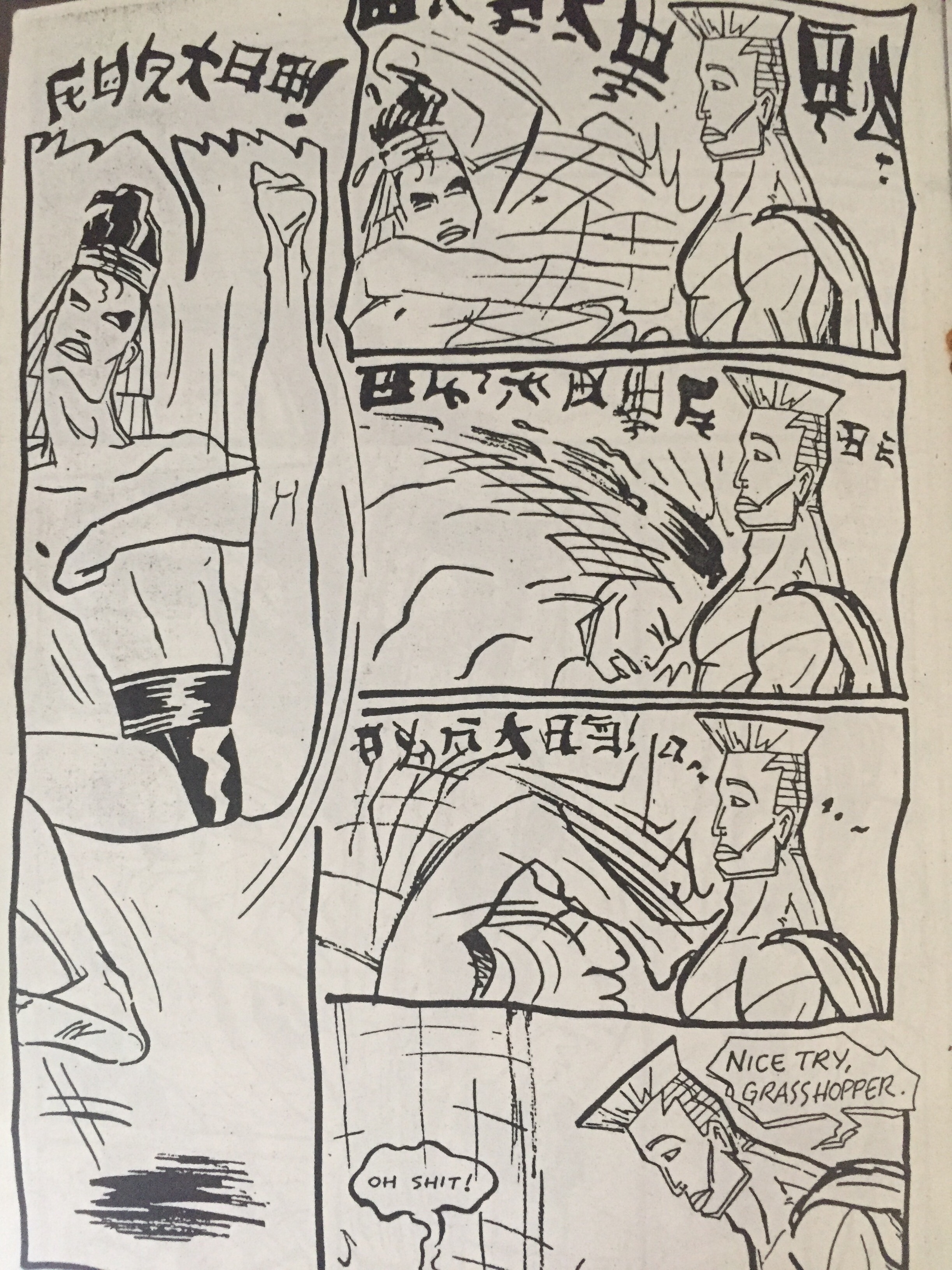 Mikey had been given his powers by a mysterious being – to be determined by Craig. Tony Foster explains, “I wanted Craig to continue to draw the character but to do that I felt he should write it too, to try and keep his interest. The last double page spread was his idea. Where it would go no one knows. In the end Craig wanted to do his own things and that was the right choice to make.  Apart from a one off Captain Scotland poster by 2000AD Missionary Man artist Garry Marshall in 1990 the character would sadly not appear in future issues of Atomic again.”

Atomic would go from strength to strength with great work from Garry Marshall, Simon Fraser, David Cairns, John Erasmus, David Johnson, Tom Walbank and John Miller for 13 issues, until January 1992.  Particular highlights were ‘the Godmother’, ‘The Girl with the Flowery Trousers’, ‘The Two Dimensional Horror’ and ‘Thievery For Fun and Profit’. The title received rave reviews and published 13 issues in total – soon to be made available again online. You can read more about that at 2000AD and Beyond blog here

Captain Scotland was missed, but laid to rest, among a series of unusual aliens inside a UFO over Edinburgh.  He was not forgotten and in the book ‘The British Superhero’ by Dr Chris Murray, published in 2017, Captain Scotland is mentioned alongside Watchman, Dark Knight Returns and Zenith – read it here

Writer Tony Foster went on to a marketing and communications career to students over 20 years. During that time he came back to superheroes and a cast of Hollywood thousands with a ‘first of its kind’ comic student handbook, drawn by 2000AD Nikolai Dante/Doctor Who/Kingsman artist Simon Fraser, for the University of Paisley – which you can now read online for the first time here.

However in this post devolution era, twenty years since the Scottish Parliament and 27 years since he last appeared, is it time for Captain Scotland to return?

“We’ve been asked about that a few times. Our version of Captain Scotland was visually unique”, explains Tony Foster.  “It would be interesting, in a Twin Peaks style twist, for Scott Stewart to appear disorientated on the new Queensferry bridge and experience a different Scotland to that of the late 80’s.  It would be fascinating to explore how a 22 year old frozen in time would relate to his 50 year old friends and his poor parents after mysteriously disappearing into nowhere.  I’d probably introduce some plot twist that he can get his powers from a nip of a good malt whisky from a hip flask, as the merchandising possibilities would be endless.  Along with a book of comic artists depicting the good Captain visiting well know Scottish tourist destinations, the touring expedition of said art, the colouring book, the charity art auction, the limited edition prints, the junior line of stories, the cos play, the tartan, the Outlander style TV series, movies and games to follow and just generally being a poster boy for all things Scottish.  Quick, stop me before I go overboard – but open to offers so, call me!”

It sounds as if the adventures of Captain Scotland may not be over just yet…stay tuned! 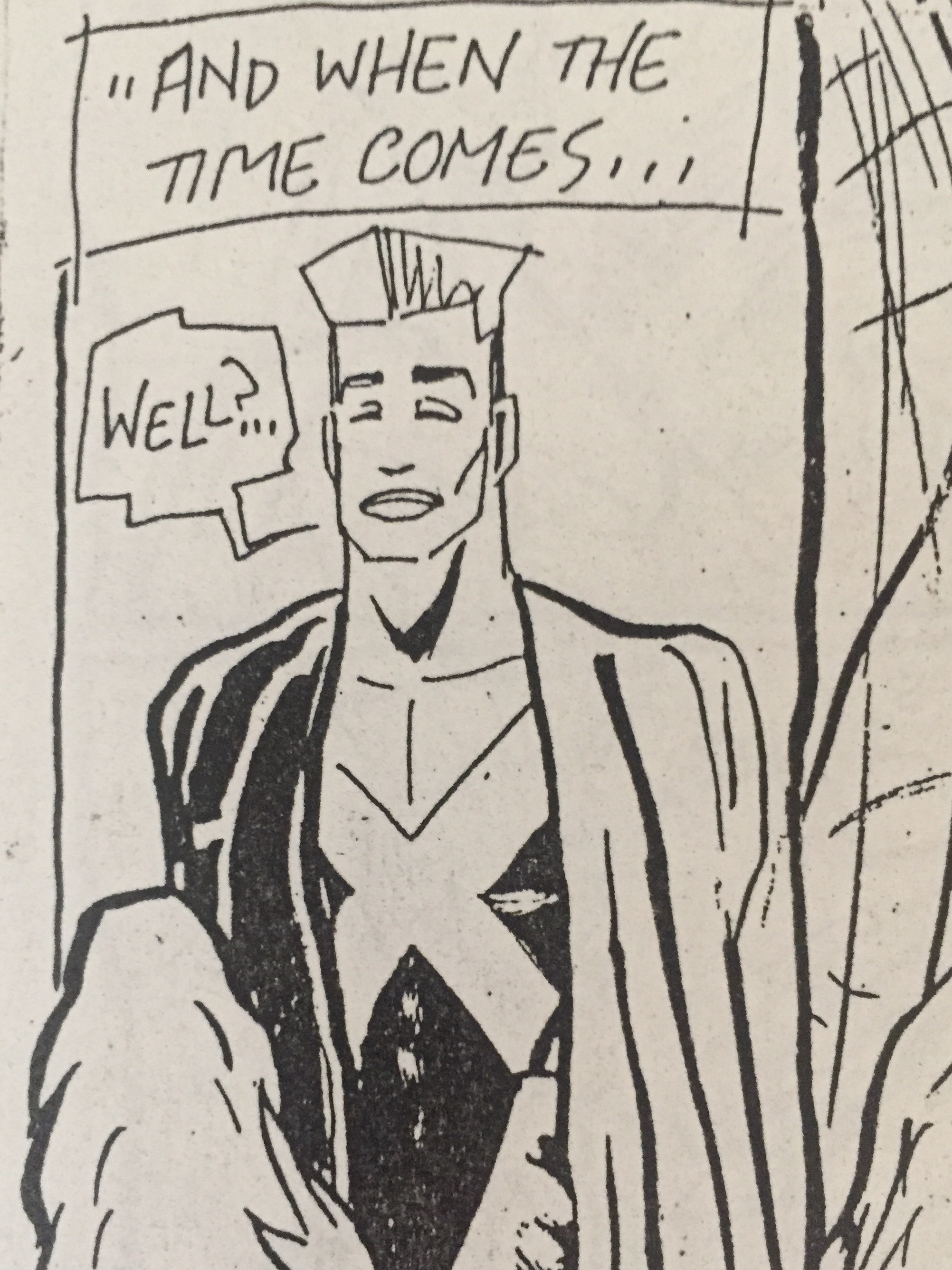