Secrets about the return of Captain Scotland 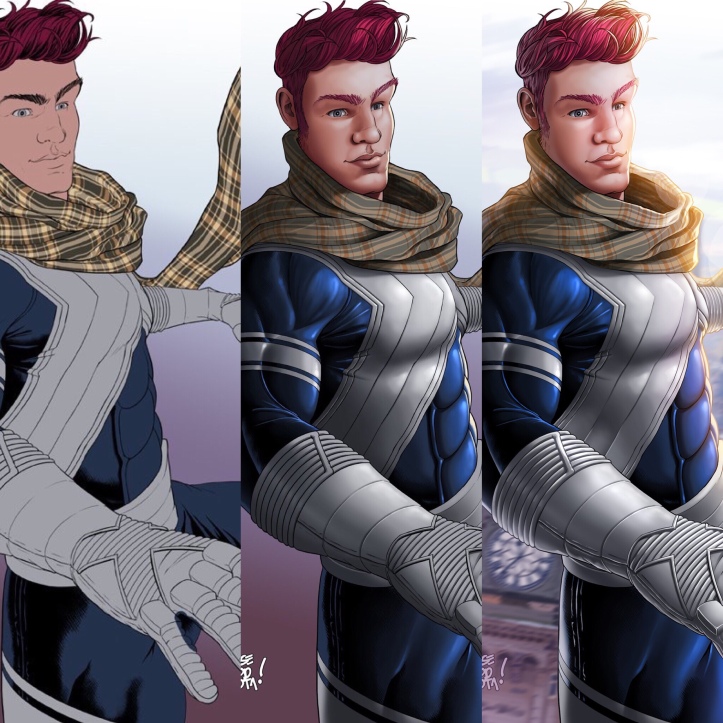 In 2017 we saw the return of Captain Scotland in a short story by Tom J Fraser. In this interview with the creator Tony Foster and Tom we find out the background to the characters reappearance, the creation of the story and plans for the future.

COMICSFLIX – Why did you bring back Captain Scotland?

TONY FOSTER – I visited the Frank Quitely exhibit at Kelvingrove Galleries in Glasgow. His work on Electric Soup was around the time I was publishing Atomic. It reminded me about the title and the character Captain Scotland. It struck me there was a lot of nostalgia about that time in books by Steve McManus, Pat Mills, David Bishop and Barrie Tomlinson and it might be fun to revisit the Atomic title again, making it available for people to read digitally. When searching on the internet I noted Captain Scotland was mentioned in a book about British Superheroes, which took me by surprise. I guess that was when the idea of a new short story came about, which Tom agreed to write. Before that I hadn’t even thought about it. Maybe it’s a mid life crisis kicking in!

COMICSFLIX: In an 80’s style dream sequence you got rid of Captain Scotland’s original origin story. Why did you do that?

TONY FOSTER: As we played around with the character we realised there was potential for him to become a tangible brand for Scotland. I’m not sure that will actually happen but injecting himself to become stronger had to go, as it didn’t seem appropriate and impractical. So drawing his powers from the lands natural resources seemed like a more modern idea. I know there are plans that he can time travel with a nip of whisky, based on a ‘deep time’ theory, but that’s as controversial as it gets! 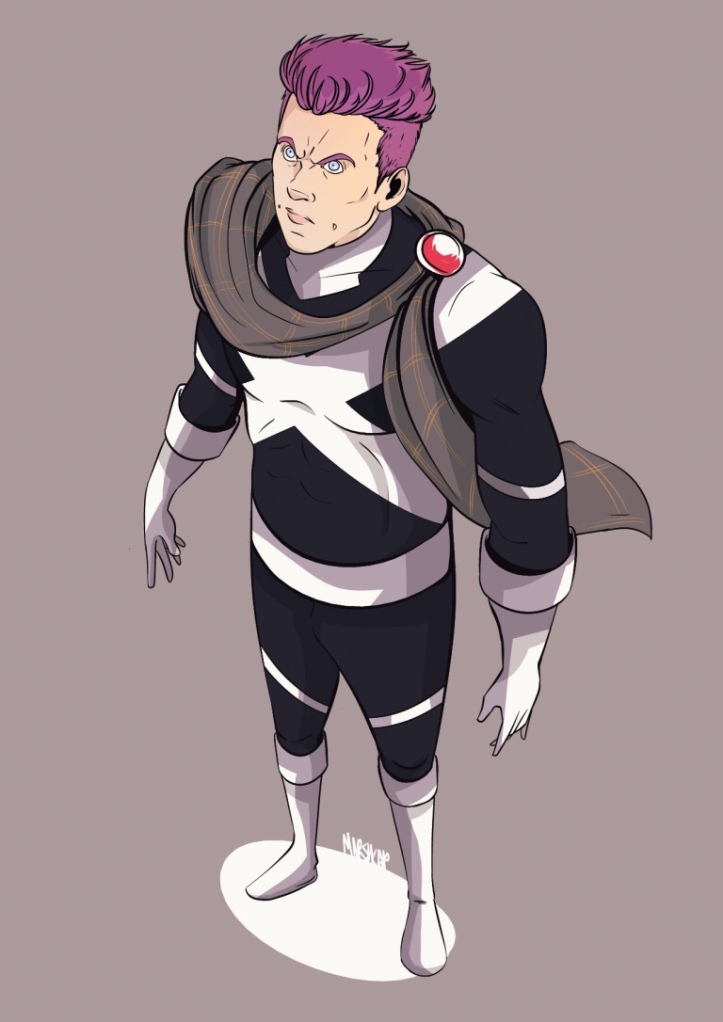 TONY FOSTER: Yes I know! I’ve always wanted artists to portray a silhouette of Captain Scotland as a thistle but everyone seems to think it’s a bad idea. Valentina Mozzo came forward with a more updated version of the character, with an early New Romantics touch. I’m sure that wasn’t his intention, but it drew me to his version of the character as we explore the 19 year old boy who disappeared in the 80’s and reappeared 30 years later in the 21st century.

COMICSFLIX: Valentina originally sent you a version of the character as a bearded 50 year old.

TONY FOSTER: He did. And we changed the story because of it. Originally Captain Scotland’s alter ego was also going to look like a 19 year old Scott Stewart. But then we thought why not make him look 50. It allows us to explore things that Esquire and GQ don’t tell you about hitting that age, including hairs spouting from ears and nostrils and the eyesight going! Captain Scotland remains a late teenager though – and Valentina captures that youthfulness perfectly. It gives the story an appeal to people young and old too! 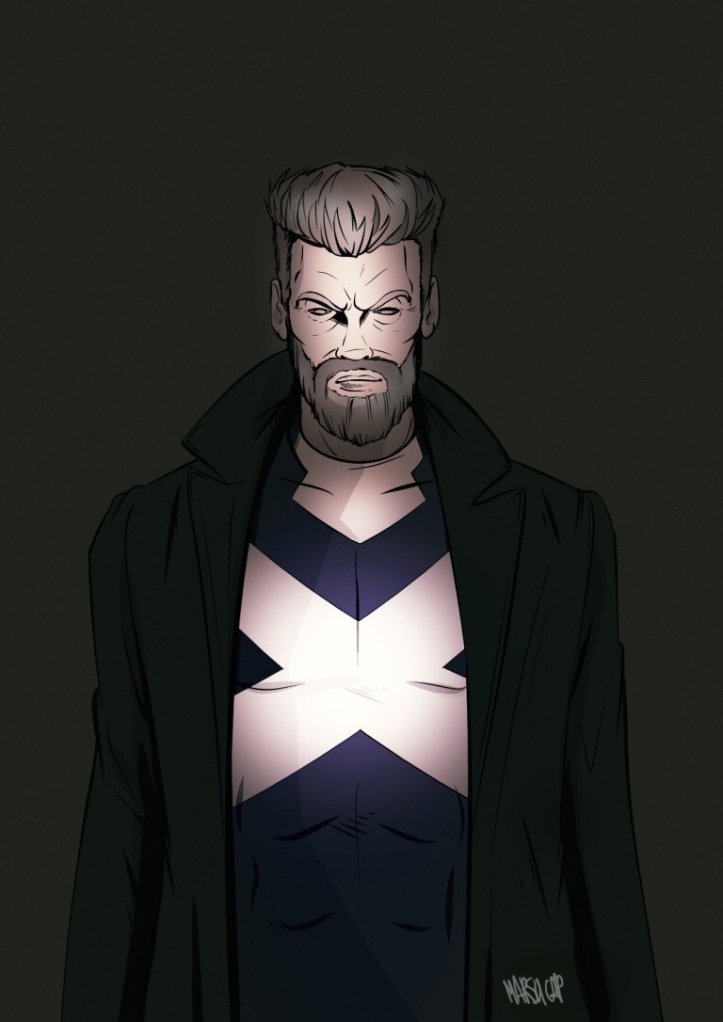 TONY FOSTER: Yes. That was the brief. We want the character to promote Scotland. Using a superhero appeals to adults and kids and translates beyond our own borders. You can promote Scottish goods, creative art projects, digital products, places to visit, history and modern life in Scotland today as well as create new stories. It’s possible – the media interest in the characters return and superheroes in general shows there is an affection for such things. I need a good agent to make it happen! 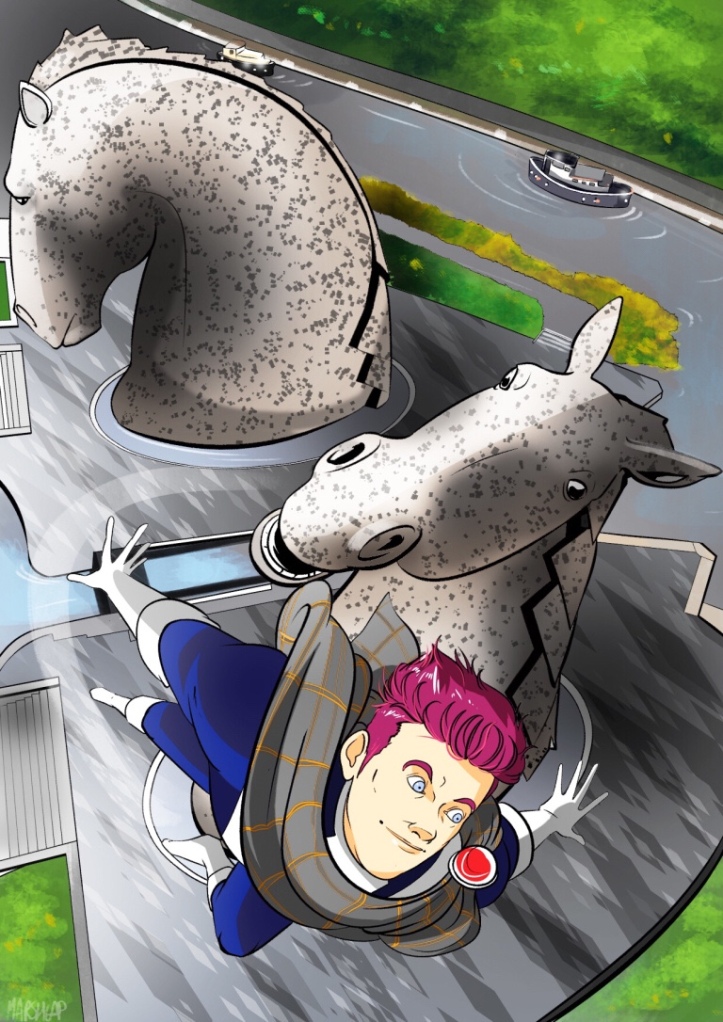 COMICSFLIX: Were you surprised by the Media reaction?

TONY FOSTER: Absolutely! Everyone has been so kind sharing the story of Captain Scotland’s Return. We never realised how many people involved with comic books remembered the character, let alone read Atomic! It was a complete surprise. 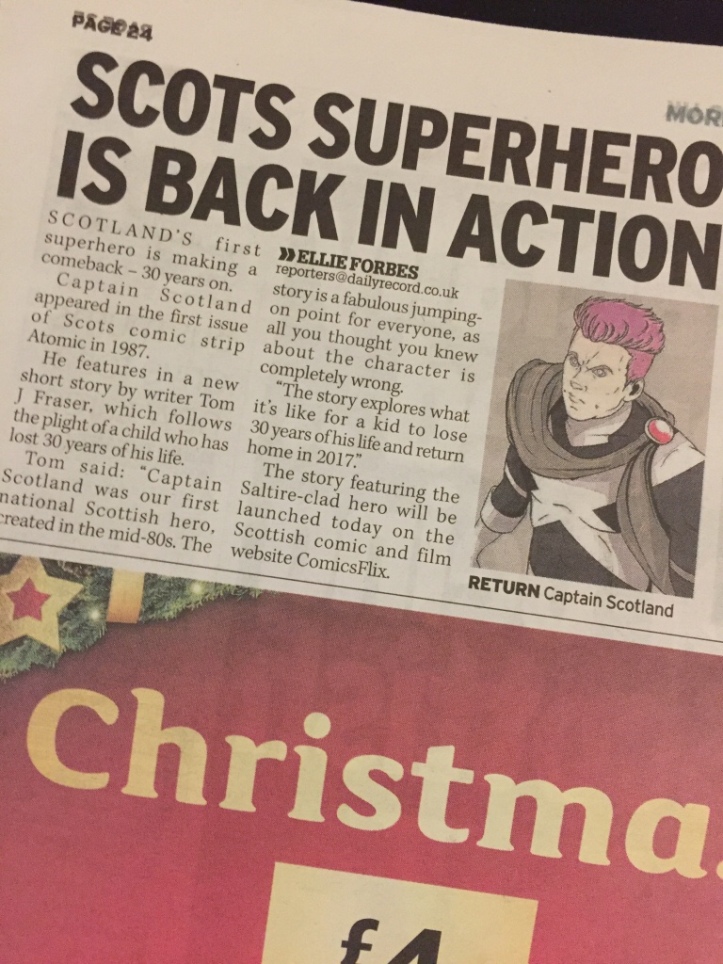 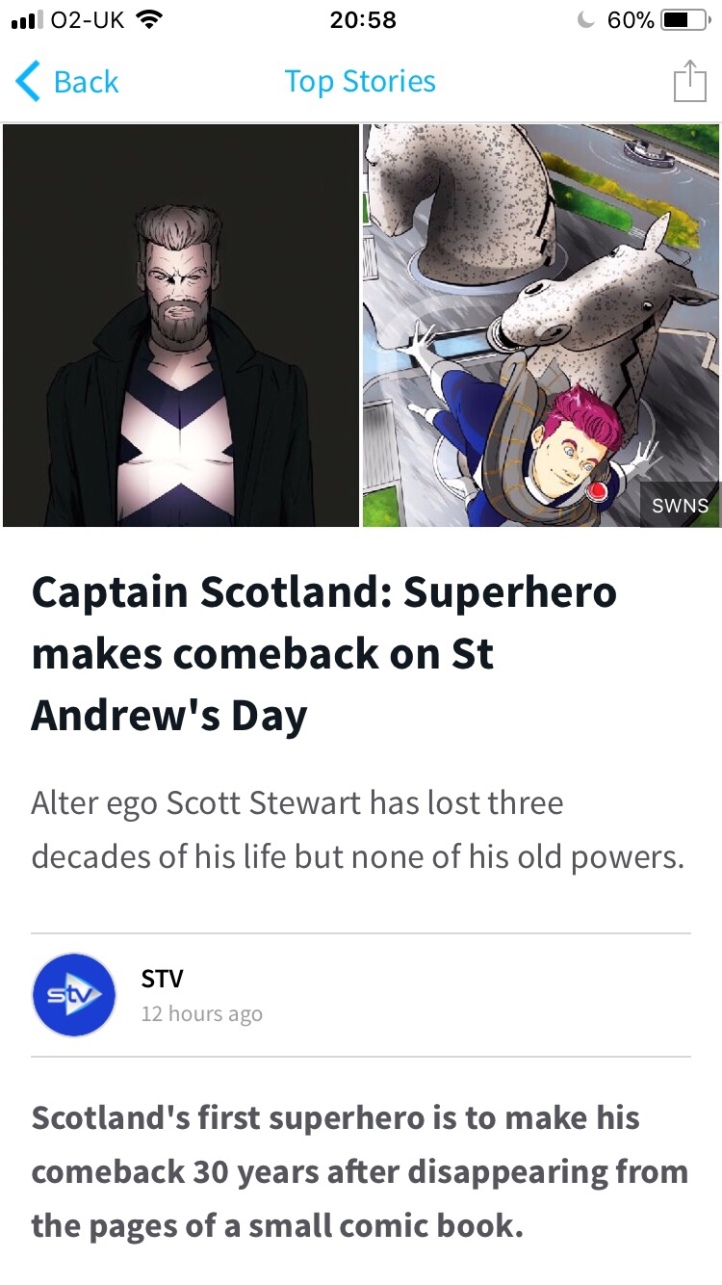 COMICSFLIX: Tom, you had to make some last minute changes to the story.

TOM J FRASER: The plan was to launch the story on St Andrews Day with an iconic start – the reappearance of Captain Scotland on the new Queensferry Crossing. Days before publishing the story a political storm brewed about snagging work starting on bridge the very same day, which we knew would probably be featured in Jackie Bird’s BBC Scotland news bulletin. So we included it.

COMICSFLIX: You also predicted a few other things in the story.

TOM: First Minister Nicola Sturgeon announced a national kindness initiative and is was by pure coincidence we had Captain Scotland give free hot rolls away in the story. We were simply trying to make some subtle political statements, as well as just showing it’s nice to be nice.

COMICSFLIX: There’s a few name drops in there too!

TOM: Prince Harry’s Engagement was being discussed. We included that last minute – literally the morning we published the story. We tried to throw in some humour about that, but it didn’t work. I think I preferred the gags about not understanding Piers Morgan and people pronouncing Ya Choob as You Tube anyway.

COMICSFLIX: Did you come up with the ‘Back to the Future’ title before you wrote the story.

TOM: No, it came later. The story developed a Back to the Future vibe to it – but written from a 21st Century perspective. I’m sure people will analyse the skateboard scene at Edinburgh Uni was a reference to the Back to the Future film but it wasn’t intended to be as I wrote it. I wish I’d expanded it now with drones, wind turbines and an ending in a field of manure! There was so much material we could have used from Scotland 1987 to Scotland 2017. There is plenty of marerial to explore in the future. 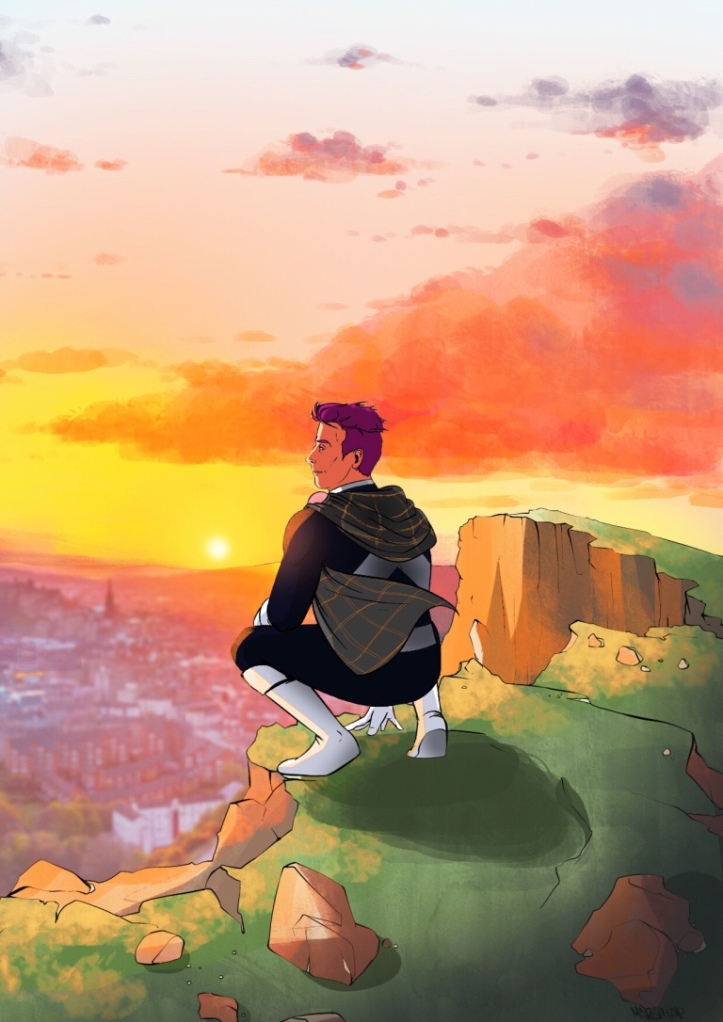 COMICSFLIX: You had to change Captain Scotland’s origin story.

TOM: Yes. Tony had said they were trying to be ‘Knockabout Comics’ controversial with the story in the 80’s. They were teenage kids trying to mock sex, drugs and rock n roll but it didn’t really work. So we played about with some 80’s popular culture references, brought together some actual historical coincidences from the previous storylines, through in a curve ball about the lightning strike origin on Arthur’s Seat and came up with something more palatable for a modern day audience. So a completely new story! The new Captain Scotland lends itself to stories for kids, teenagers and adults.

COMICSFLIX: You refer to some of the original supporting characters in your new version though.

TOM: If we get to do more stories that is going to be so much fun exploring those characters even further – especially thirty years later. We also get to meet Captain Scotland’s Parents for the first time. Again you think Scott was just a poor student from the 80’s story but actually his parents are quite well off, connected and influential. Scott is bound to rebel against that lifestyle though, once he’s cashed in his trust fund and built a bat cave full of wonderful toys.

COMICSFLIX: There is also a hint that other superheroes might make an appearance in future stories too?

TOM: Without a doubt. A school of superheroes is planned as is a female Scottish superhero called ‘Ecosse’. That’s quite exciting! But the soap element of the supporting cast will bring some great storylines beyond heroes and villains hitting each other!

COMICSFLIX: Any other secrets you can share with us? 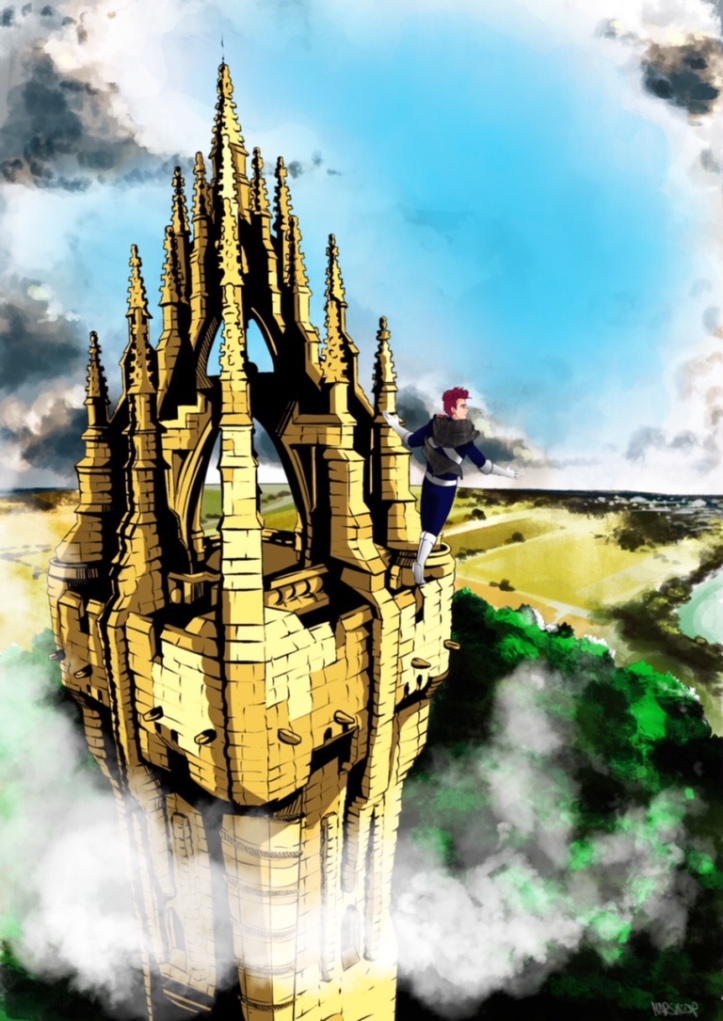 COMICSFLIX: Were you pleased with the artwork that accompanied the story?

TOM: It was amazing. Valentina Mozzo really captured the young Captain Scotland really well. I know Tony was keen to showcase the hero in Scottish settings. The artwork could be used in educational kids book or on postcards and posters. Valentina’s fabulous illustrations were perfect for that. The illustrations also helped when attracting media attention for the story.

COMICSFLIX: Valentina wasn’t the only artist to portray Captain Scotland.

TOM: Jose Rodriguez Mota did an illustration too. He shared how he put it together on social media. Tony loved that too. He wants kids to discover drawing, creative media or Scotland through the project. It’s more than comic book stories for him. He thinks relying on that is quite limiting. He wants Captain Scotland on the side of Tunnocks Tea Cakes! He also loves showcasing new writers and artists work. That’s what Atomic was all about in the 80’s. That’s his thing and he’s playing around with that at the moment. The Captain Scotland short story was a good start. Hopefully we can do more in the future.

COMICSFLIX: Tony and Tom, thanks for your time.

You can read the Captain Scotland story here. 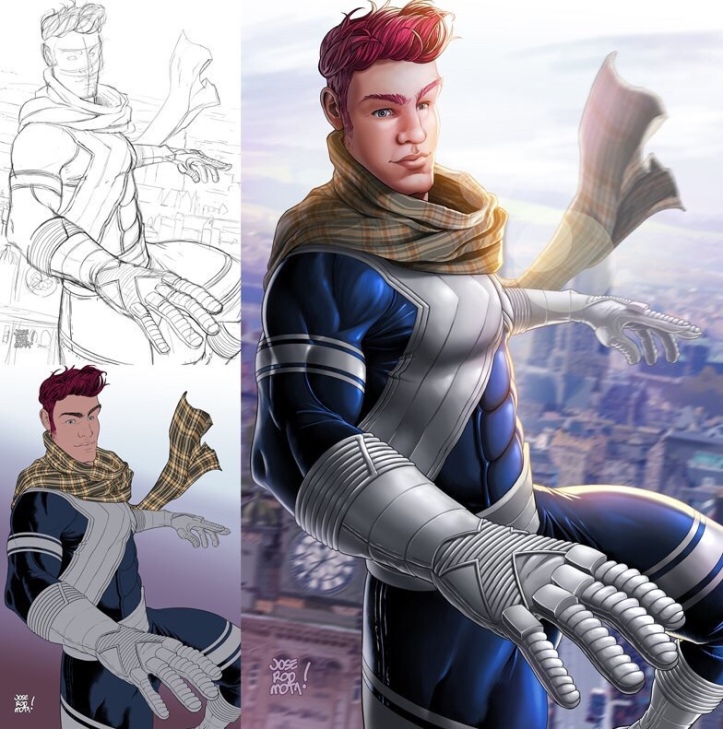 Leave a Reply to Captain Scotland – Back to the Future – COMICSFLIX.org Cancel reply