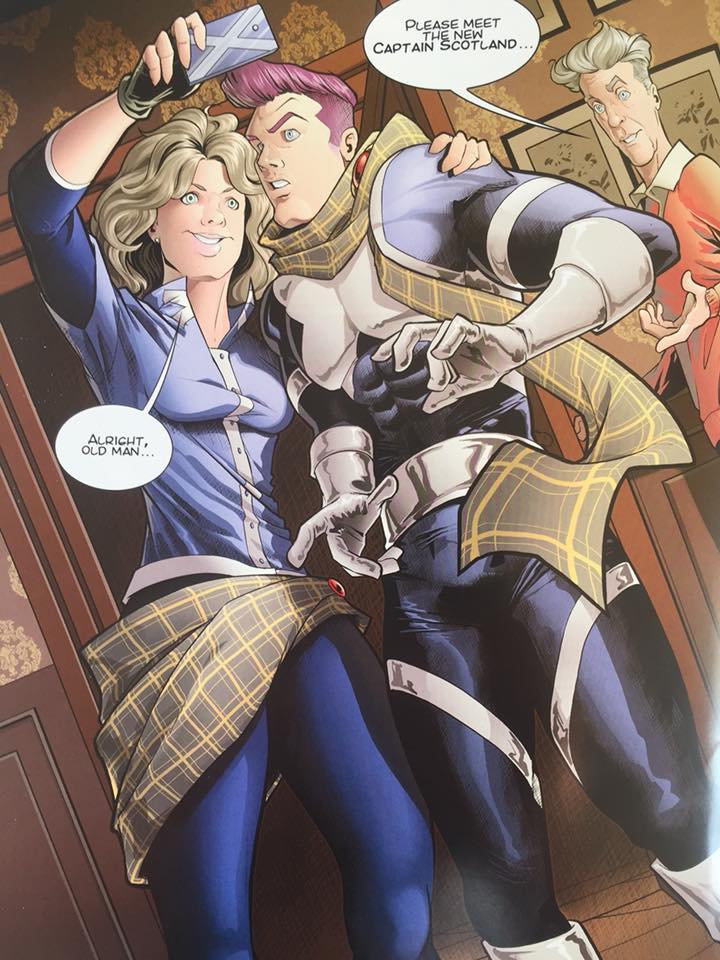 Captain Scotland is back – and has been replaced by a teenage girl!

In November 2017 Scott Stewart, alter ego of Captain Scotland, returned after being away for thirty years in a short story on the http://www.ComicsFlix.org website.  His reappearance was covered in many major newspapers and media outlets in Scotland.

In the new 64 page magazine ComicScene UK, released this month, the story continues in picture strip form by artists Jose Rodriguez Mota and Valentina Mozzo, but ends with a shock revelation.  In a one off story the rights to the name Captain Scotland have been claimed by a media savvy teenage girl who intends to not only be a superhero for the 21st Century but have control over the potential merchandise that will follow.

Details of how you can get the magazine from shops, mail order or digital can be found at www.comicscene.org

Writer Tom J Fraser explains, “We wanted to capture the changes happening in society, not only in a retrospective way as in the ‘Back to the Future’ storyline.  We refer to the Year of Young People in the short story and we wanted to capture that spirit too.  Captain Scotland is now a teenage girl who will not only be a superhero but will attempt to take control of her own image in the media and on merchandise.  Is the corporate world and fake news more dangerous than aliens from another planet?  Future stories may have the answer.”

So what will happen next for Scott Stewart?

“He’s having a bad time but I’m sure he will bounce back.  He may look fifty but he has the drive and energy of a 20 year old.  He will take on a new superhero identity and go off on a new adventure.  More will be revealed about that and the further adventures of Captain Scotland in the one off Atomic special due later this year.”

Atomic was a Scottish small press stripzine which lasted 14 issues in the late 80’s/early 90’s.  It featured the original Captain Scotland and a whole host of creators who went on to have successful careers in music, the arts, publishing and comics.  Many of the original creators are coming back for a one off special, 25 years after the publication ended.