ComicScene Magazine to go on sale in Sainsbury’s Supermarkets 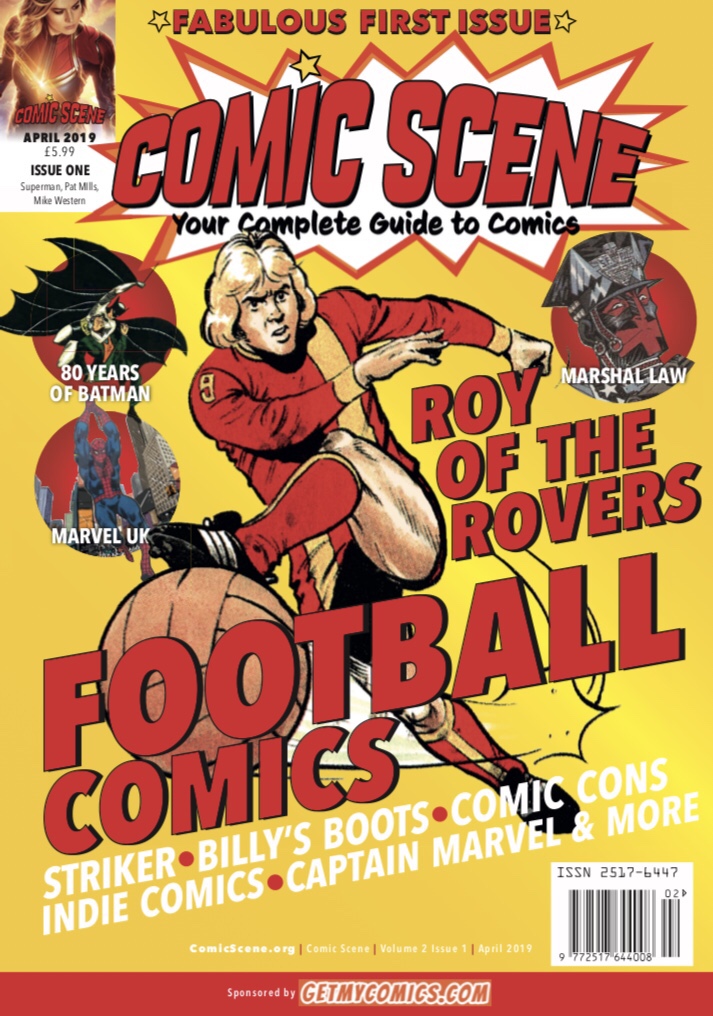 The first monthly issue of ComicScene Magazine, featuring classic Roy of the Rovers on the cover, will be promoted and sold in 400 selected Sainsbury’s Supermarkets from 21st February.

The supermarket will join WHSmith, McColls, Easons in Ireland and comic shops like Forbidden Planet in stocking the only dedicated magazine about comics and comics culture in the U.K. and Ireland.

Publisher Tony Foster said today, “We are very happy ComicScene will be in Sainsbury’s and getting the magazine in front of a new audience. We hope people will discover how vibrant the choice of comics that are currently available are. The magazine is a great introduction to classic, new and small press comics and can help guide everyone to seek out something new each month.”

ComicScene was launched as a subscriber only magazine in May last year but quickly became available in selected comic shops. Strong positive word of mouth led the magazine to be made available in all comic shops in the U.K. and Europe via Diamond Distribution and then by Inter-Media into stores nationwide and in Ireland.

After a Pilot Issue over the Christmas and New Year period the magazine has relaunched with Volume 2 Issue 1 and is a great starting point for new readers. The magazine can also be ordered in to any newsagent across the country via their wholesaler as well as WHSmith, McColls and Easons in Ireland.

Most Volume 1 back issues have sold out but are available in digital alongside a picture strip filled ComicScene Annual and can be ordered through the online store at http://www.comicscene.tictail.com

The magazine also recently launched a ComicScene PodCast at http://soundcloud.com/comicscene

‪We’ve got our print copies of ComicScene - designed by @_TheBurgh , printed @mixamprint , distributed by @GetMyComics and out in the comic world 🌎 We’ve been on newsstands a year now and this was a great issue to produce - our 18th in total! www.getmycomics.com/ComicScene ‬
‪Just signed off on ComicScene + which will wing its way to ComicScene subscribers soon. It’s an 80 page digital extra with each issue of ComicScene. Includes the first Comic Creator Directory. Subscribe to ComicScene for under £20 at www.getmycomics.com/ComicScene to get your copy!‬ Only £4.99 an issue for 160 pages of material!
‪It’s probably worth a reminder you can order ComicScene Magazine in any newsagent or shop that sells magazines close to you, not just WHSmith, McColls, Easons or a comic shop. They can get it anywhere from their wholesaler.‬
On sale in shops now. Includes articles on 2000AD, Battle and comic in the seventies, Pat Mills on Action, The Trigan Empire, Warrior and Judge Dredd Co Creator John Wagner, Alan Grant and Dan Cornwell picture strip ‘Rok of the Reds’. ComicScene 12 available in print and digital at www.getmycomics.com/ComicScene ✔️Subscriber and get ComicScene+ - an additional 64 page digital supplement every issue. ✔️Get the enhanced sub for a mystery comic every month (this month Sentinel), ComicScene+, ComicScene Mug, ComicScene Annual 2021 and order before 29 Feb and get 1000+ pages of Crikey! Collected in digital for FREE.
‪Day 50 of our Eagle and Dan Dare 70th Anniversary Gallery https://comicscene.org/2020/01/27/70-years-of-the-eagle-and-dan-dare-gallery-2020/
1) You can get ComicScene in digital - it’s only £2.99 for 80 pages. www.getmycomics.com/ComicScene