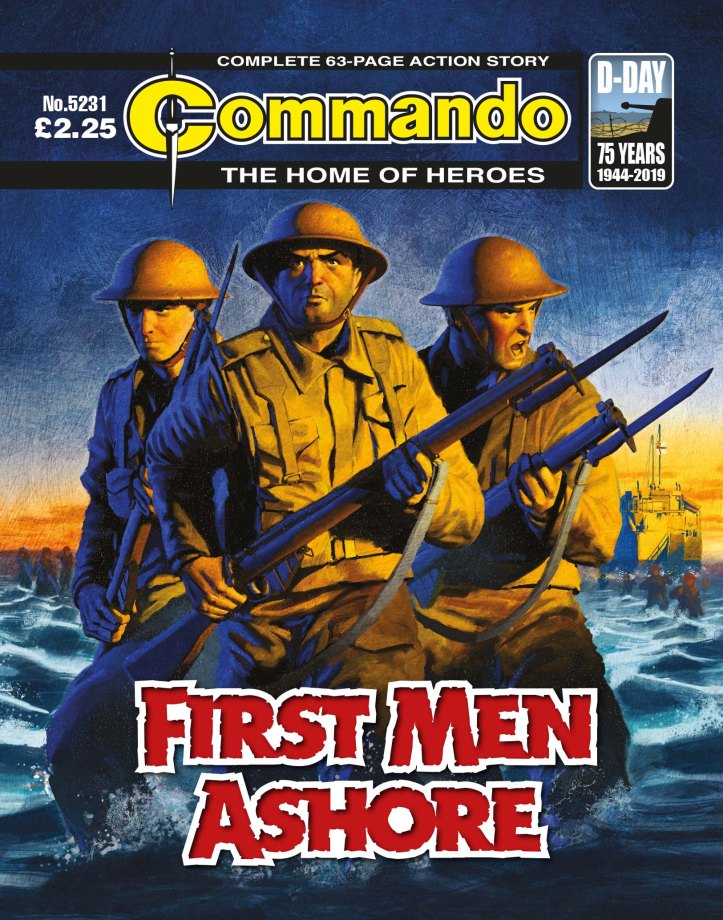 75 years since brave men stormed the beaches at Normandy, ready to fight tooth and nail to reclaim occupied land.

As part of the D-Day 75 remembrance, Commando is releasing a commemorative set of D-Day themed Commandos. From the sappers at dawn break to the Commandos on the beachhead, brand new issues

5231: Home of Heroes: First Men Ashore
First up to commemorate 75 years since D-Day is First Men Ashore. A story that focuses on the little-told heroism of the sappers on that fateful day. Writer Iain McLaughlin was inspired by the true events in the predawn hours of Tuesday 6 th June, 1944, where the 32 Armoured Engineer Regiment RE cleared the minefields ahead of the vital D-Day landings. Without those courageous sappers, the beach would have been a catastrophe for the Allied troops who were due to land at 0600 hours. 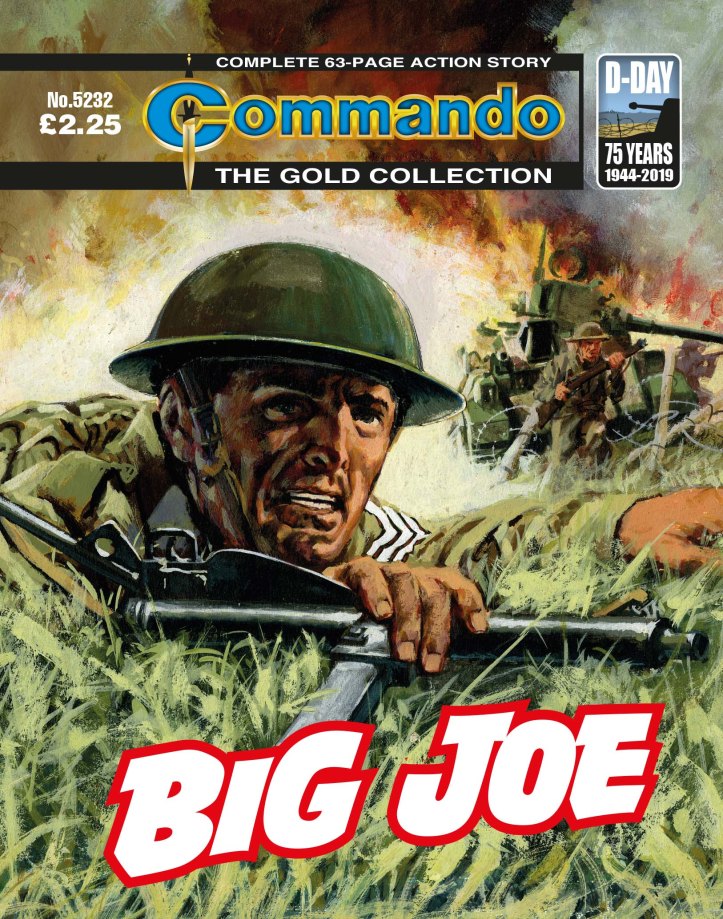 5232: Gold Collection: Big Joe
Rough and ready boxer, Big Joe Barton is geared up for D-Day. Wronged by a nasty SS Captain who cheated during their match, Big Joe is determined to get even – and no little thing called D-Day is going to get in the way of his fists! With classic cover by Lopez Epsi, this Commando is a belter!
| Story | Fitzsimmons | Art | Cortes | Cover | Lopez Espi|
Originally Commando No. 203 (1966). 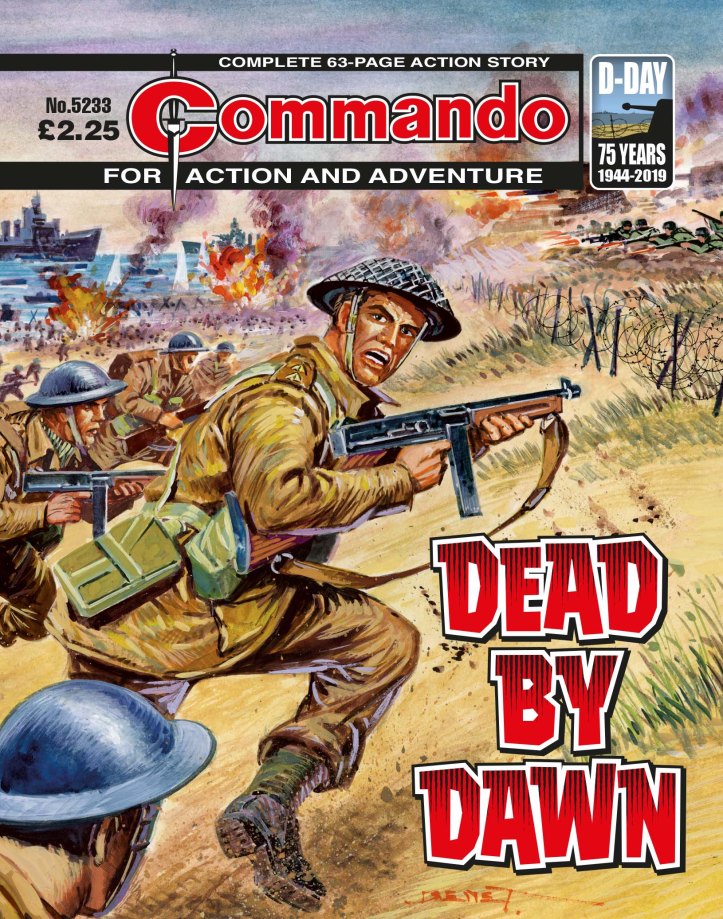 5233: Action and Adventure: Dead by Dawn
Kate Dewar is Commando’s second female writer in 30 years and she smashes into comics with a whopper of a story! Dewar’s plot starts on the morning of the D-Day landings but focusses on the events of Battle of Port-en-Bessin on 7 th June, 1944, where the brave Royal Marine Commandos took the Nazi stronghold. As Dewar says:
“The issue was inspired by a meeting with Royal Marine Commando re-enactors at Military Odyssey in Kent last year. Researching one of their main tasks, Operation Aubery, I knew it would be the perfect setting for a Commando and a great way to commemorate the 75th  D-Day anniversary. It’s also a story about family being more than blood and the bonds between these men, all of whom were volunteers.”
| Story | Kate Dewar | Art | Manuel Benet | Cover |Manuel Benet | 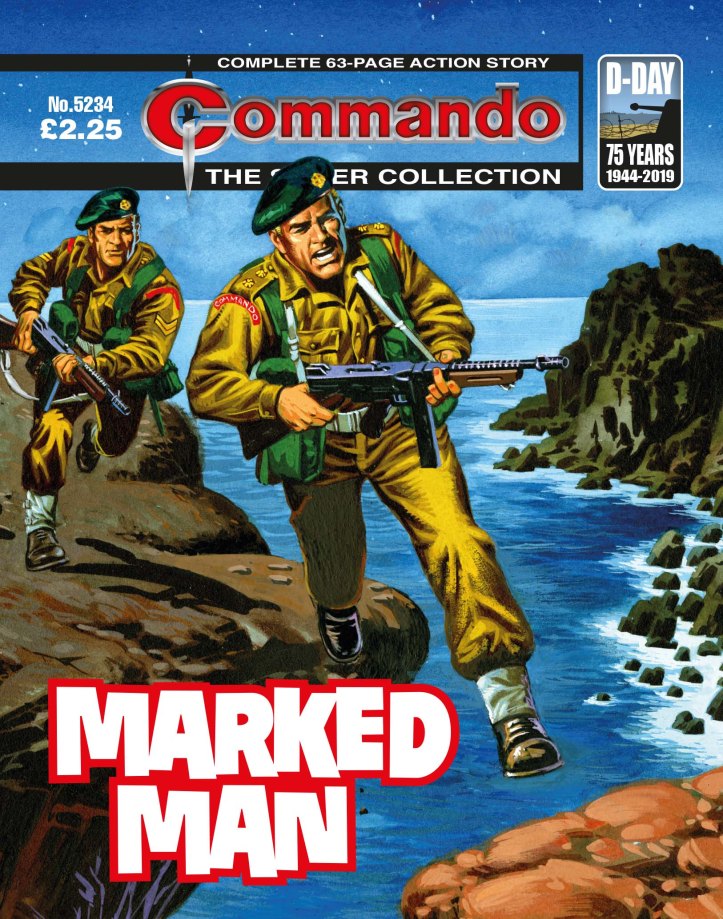 Inspired by Operation Bodyguard, our protagonist Pete Barton – of no relation to Big Joe – is tasked with a mission no man would want; to plant fake invasion plans on a dead British Commando. Only, when everything goes wrong, he’s pegged as everything from a coward to a spy to an actual German soldier! It doesn’t matter to Pete, what really matters is that those fake plans get into Nazi hands – at any cost necessary!
| Story | Bounds | Art | Gallindo | Cover | Gonzalez |
Originally Commando No. 570 (1971).