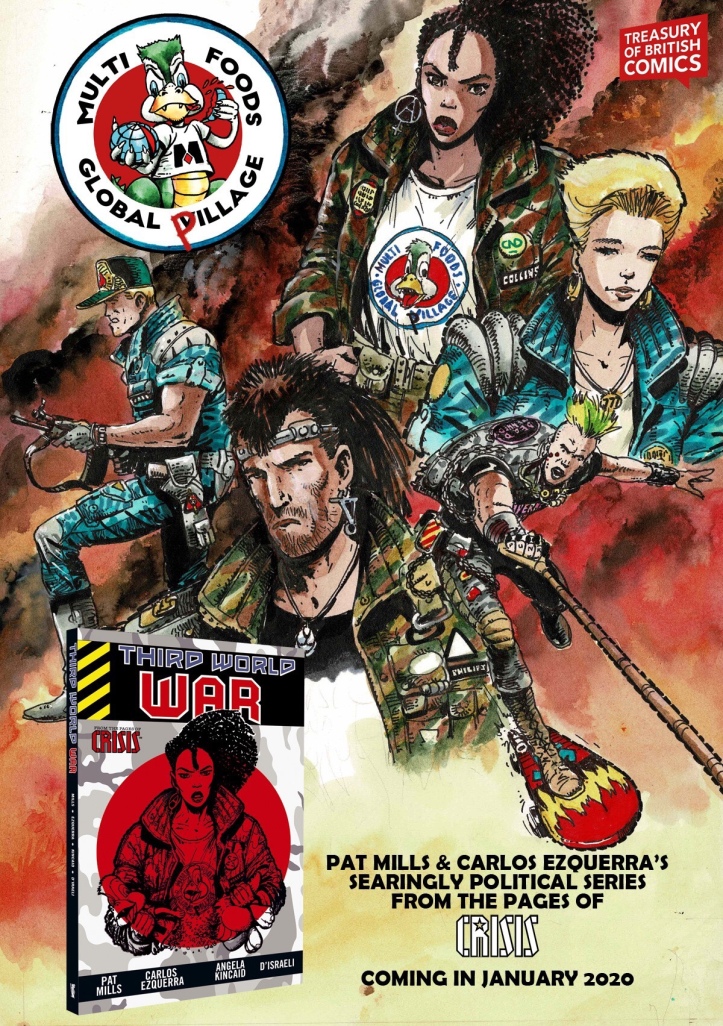 Today the Treasury of British Comics shared the release of Pat Mills and Carlos Ezquerra’s ‘Third World War’ from the pages of ‘Crisis’. Watch out for it in 2020. They include some of the newly scanned pages on their website at https://2000ad.com/post/5540

I remember reading the series when Crisis was originally published but don’t recall ever seeing it widely reprinted, so expect this to sell well. From what I vaguely recall it will probably resonate as much in today’s political climate as it did in the late 80’s. We did cover Third World War in the ComicScene War Issue in Volume 1. You can pick that up in digital at our website or Magazine Heaven still have some very rare print issues https://www.magazineheaven.com/catalog/product/view/id/22281/s/comic-scene/+subscription_length-Single~Issue~-~Issue~3~Dec~18

Pat is over in Dundee on the 20th September at an event in the new V&A as part of the launch of the ‘Great War Dundee’ comic and his strip ‘Ragtime Soldier’, which he is comparing to his critically acclaimed ‘Charley’s War’. I truly wish I could attend but the day job beckons. However there are tickets still available if you wish to pop along and the programme is below https://www.eventbrite.co.uk/e/great-war-dundee-the-war-in-comics-and-popular-culture-tickets-70893896553?ref=eios

I am pleased that the kind folk at Dundee University have agreed to let ComicScene reprint the comic in its entirety in Issue 9, as a 32 page pull out supplement. This will mean a complete ‘rip it up and start again’ revamp of the contents we are putting together right now but I think being able to publish this comic and circulate to a wider audience is too big an opportunity to miss. We receive the pdf tomorrow and I am literally peeing my pants about the prospect of seeing it and printing it. The Cover by Ian Kennedy looks gorgeous. You can pre order issue 9 on our website at http://www.getmycomics.com/ComicScene

Phillip Vaughn talks about the project on a new surprise ComicScene Podcast launched this week https://soundcloud.com/comicscene/great-war-dundee-extra-episode